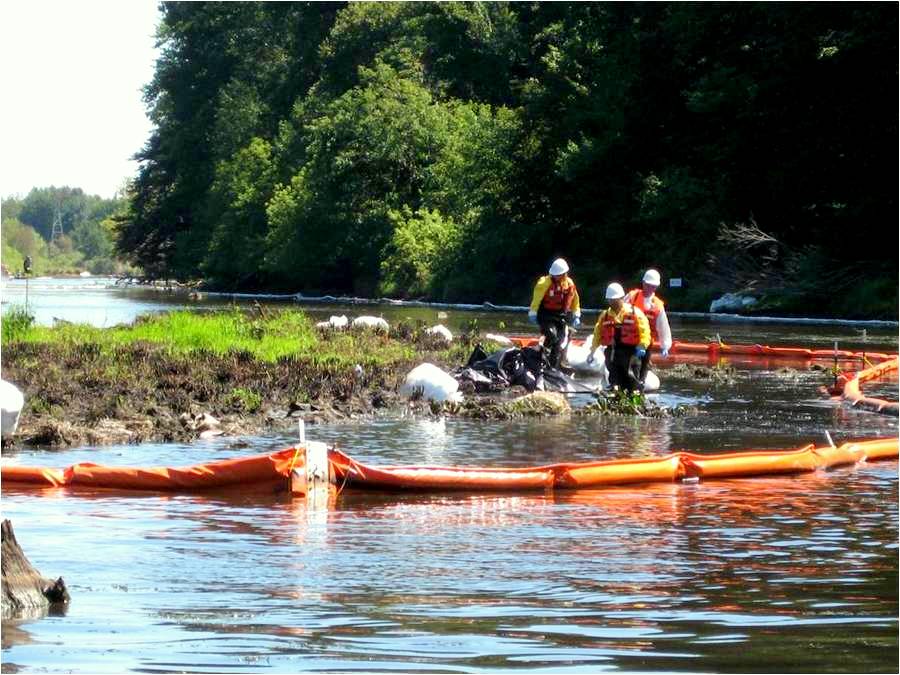 by Steve Hamilton and Julie Doll

When Enbridge Energy’s ruptured pipeline disgorged almost a million gallons of diluted bitumen (“dilbit”) oil into the Kalamazoo River three years ago, nobody imagined that we would still be dealing with the cleanup three years later, or that the cost would be approaching a billion dollars.

Yet that is where we are, with major dredging operations set to begin in three reaches to remove the most concentrated hotspots of submerged oil and stop the sheening it produces. We can only hope these efforts are successful and that the river can return to normal. Already we can thank the many dedicated people who have worked long and hard to clean and restore the river and its floodplain.

The oil spill—as well as the cleanup operations—has been hard on the river, not to mention the people who live along it and those who use it for recreation. But the plant and animal life in and along the river has displayed remarkable resilience. Many stretches of the river and riverbank have recovered, with invertebrates, fishes, wildlife, and plants returning to resemble what was there before the spill. Subtler, longer-term negative effects are certainly possible but have yet to be revealed. We hope continued monitoring can be funded in order to understand those long-term impacts.

The Kalamazoo River Watershed Council has been engaged in the oil spill cleanup from the start, and members continue to provide advice on the cleanup and keep others informed. We have given talks to audiences ranging from university scientists to middle-school science students to the public at large. We have been present at countless meetings, and our President (Dr. Steve Hamilton) volunteers on the Scientific Support Coordination Group convened by the U.S. Environmental Protection Agency. In addition, we continue to contribute to radio, television, newspaper and magazine reports in local, national and international venues.

This catastrophe has attracted a great deal of attention because it was the first major spill of diluted bitumen oil, that is, heavy oil from the tar sands deposits in western Canada diluted with lighter hydrocarbons so it can be pumped in pipelines. This is important as tar sands are increasingly looked to for providing new petroleum sources to North America and the world. Many lessons have been learned about how difficult it is to clean this material from an aquatic environment, which should incite us to redouble efforts to make pipelines safer and responses to spills faster and more effective.

But more importantly, tragedies such as the Kalamazoo oil spill and the devastating train wreck in Canada this month should encourage us to think hard about the costs of our ever-escalating quest for new petroleum sources to feed our ravenous global appetite for fuel.

The costs of exploiting new fossil fuel sources like the tar sands go way beyond the devastation of an occasional spill; these costs will be borne by future generations as the carbon dioxide pumped into the atmosphere wreaks havoc on our climate. For centuries after this period of reckless fossil fuel consumption comes to an end, its ramifications on our climate will continue to negatively affect every aspect of our Earth. On this dark anniversary, that’s worth a few moments of reflection. How can we lessen the damage we are creating and leave a clean, fruitful world for future generations? How can we make conscience-driven choices about how we use our natural resources that take the future into account? How can we live in a way that ensures a stable climate, clean air and water, and healthy food for everyone, now and far into the future?

We have countless opportunities to think creatively and work together to build vibrant, healthy communities that are not dependent on fossil fuels. Economic development does not have to suffer when we take action to stop climate change. The Council will do our part to make sure that the lessons gained from the Kalamazoo River oil spill were not learned in vain. We look forward to working with leaders and members of our community to move Kalamazoo towards a safer and more sustainable future.