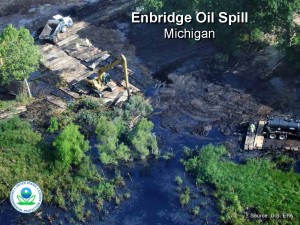 In July 2010, a massive oil spill was discovered in Talmadge Creek, a small tributary to the Kalamazoo River near Marshall, Mich. It was the result of a ruptured pipeline managed by Enbridge Energy Partners, LLC. Up to a million gallons of tar-sands crude oil was released into the creek, which contaminated a 30-mile stretch of the Kalamazoo River in excellent ecological condition. The magnitude of the oil spill made it one of the largest in-land oil spills ever experienced in the United States at the time.

The river level was unusually high at the time of the spill, unfortunately resulting in the spread of oil onto river banks and into expansive floodplain wetlands. The most heavily oiled river banks and floodplains were upriver of Battle Creek, but oil also contaminated the river downstream to the upper end of Morrow Lake. The emergency response, coordinated by Enbridge Energy, U.S. EPA, and state and local government agencies, successfully contained the oil above the remaining 80 miles of river (and Lake Michigan). Around 3,000 animals, mostly turtles but also geese and other water birds and some mammals and snakes, were collected, cleaned and released or maintained in captivity over the winder. Surprisingly, there were no significant fish kills.

Over the three months following the spill, hundreds of boats and thousands of workers deployed booms and removed oil covered sediment and vegetation over the 30 miles stretch of the river and floodplain. The Talmadge Creek corridor was almost completely excavated, with clean fill returned to more or less re-create the original wetlands and stream channel. Specific locations along the entire impact zone with the heaviest oil contamination have been excavated; mostly these have been low-lying islands but a few low spots on the floodplains also required excavation. In certain areas such as behind dams and in off-channel oxbows and coves, oil was found to rise to the surface when the sediment was disturbed, indicating that significant oil had sunk to the river bottom. Those areas were either aerated to float the oil and collect it, or dredged. According to Enbridge, more than 90 percent of the oil in the river has been recovered, mostly by using booms and vacuum suction, although this remains to be verified.

All major remediation and restoration of the oil-affected reaches was completed within three to five years of the spill. This involved more shoreline stabilization and planting of native species and plants. One of the outcomes of the cleanup was the removal of Ceresco Dam, a major fish passage barrier between Marshall and Battle Creek. Enbridge removed it as part of their cleanup plan with support from federal and state agencies and local environmental organizations (including the Watershed Council). A group of local residents voice opposition to the project, but Enbridge moved forward with removing it and dredging oil-contaminated sediments in 2014.

From the beginning, the Kalamazoo River Watershed Council was named as one of the “Assisting Agencies” under the “Unified Command” led by U.S. EPA and Enbridge. This special designation meant we had a seat at the table for all public meetings and stakeholder and agencies briefings. We have closely tracked the spill response and contributed numerous technical suggestions based on the experience of our Board and our familiarity with the river and floodplain ecosystems. We have also been involved in outreach activities, including public talks and presentations to schools and community groups.