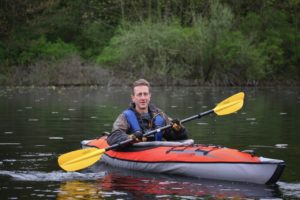 Dr. Hamilton is a Professor of Ecosystem Science at Michigan State University, where has has been based at the Kellogg Biological Station since 1995 and is a member of the Department of Integrative Biology. He also works as Senior Scientist at the Cary Institute of Ecosystem Studies in New York, and is an Adjunct Professor at the Australian Rivers Institute.

Dr. Hamilton’s principal research interests involve ecology and biogeochemistry, including wetlands, streams, lakes, reservoirs, and watersheds, as well as agricultural cropping systems and their effects on water and climate. At the Kellogg Biological Station he has recently been the Lead Principal Investigator of the NSF Long-term Ecological Research site and is a Project Leader in the DOE Great Lakes Bioenergy Research Center.

For many years Dr. Hamilton has participated in a variety of studies in tropical floodplain and river ecosystems of Brazil, Venezuela, and Australia, and presently works with several research groups in Brazil on hydropower effects in river systems. From 2006-2017 he led the Kalamazoo River Watershed Council in Michigan and often interacts with the public and policymakers. He served as an independent advisor to the EPA on the 2010 Kalamazoo River oil spill, the nation’s largest inland oil spill, and was on the National Academy of Science, Engineering and Medicine’s Committee on the Environmental Effects of Diluted Bitumen Oil Spills. He has received awards for his engagement with environmental issues from the Michigan Environmental Council and the Society for Freshwater Science, and is a Fellow of that society.