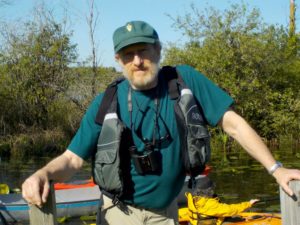 Ken has been a life long outdoorsman. He became directly involved in environmental protection as a township planner which led to helping found a watershed council of one of the subwatersheds of the Kalamazoo River. He became involved with the KRWC indirectly through community involvement with the Allied Paper, Portage Creek, Kalamazoo River Superfund Site and the Enbridge Oil Spill. He is an enthusiastic advocate for the Kalamazoo River and its tributaries. An avid canoeist, he has participated as a river guide in the Kanoe the Kazoo program every year since it’s inception in 2003.
Ken has served on the board of the KRWC since 2013 and is a Past President. He has also served as Planning Commission Chairman, Prairieville Township, Barry County 1989-2013; Founding Member and Board Officer of the Four Townships Water Resources Council since 1994. Ken is a retired clinical veterinarian.